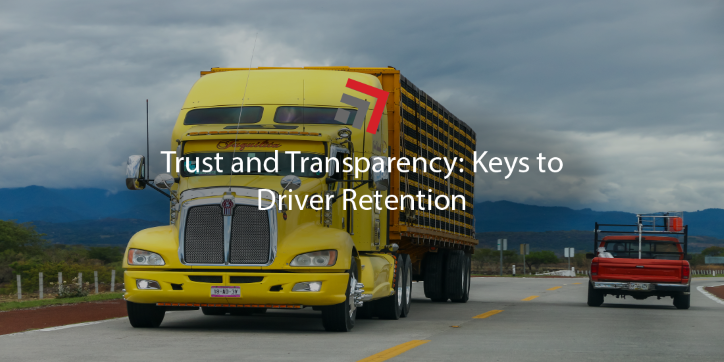 The two T’s: Trust and Transparency. For over a year, while the pandemic was in full force, driver recruitment and retention has been a great challenge in the industry. Some people in the industry say recruiting drivers is not the issue but retaining them is.

Shawn Kitchen, director of operations at True Load Time and a former driver/recruiter himself says, “The industry doesn’t have a turnover problem, it has a retention problem,” during a webinar sponsored by Transflo “You have to be transparent with your drivers about the great things as well as the bad things.” If companies are willing to own up to the fact that there are positives but also discuss the not so positive things about working at said company, but letting the drivers know that they are needed and appreciated for their work, that can go a long way with drivers.

During the webinar Debra Labree, a driver and president at Castle Transport discussed how female drivers were not popular when she began driving, then she found the Women in Trucking Association (WIT). “I was able to find other women in the industry to share ideas with and encourage one another,” LaBree said.

Some wonder if salary plays a major part in drivers leaving. Kitchens says, not so fast, “When you enter a company, you enter at a certain level of trust, but that trust can be very easily and very quickly eroded by recruiters who aren’t giving full disclosure, and dispatchers who are poor communicators or aren’t very skilled at keeping trucks moving.” For most drivers, it’s not JUST the salary that they find important, its more than that. It’s about transparency, trust, and wanting to feel appreciated.

Kitchens discuss how some companies take “driver scorecards” and use them in the opposite way they should be attended for. Kitchens stated that, “We all need accountability, but as a driver, if the first time you’re spoken to by someone in your company and get beat up about how bad you’re performing, that driver is going to look at all further communication with a negative association.” The key to using “driver scorecards” correctly, is to not just evaluate the “negative” things but making sure the positive things are noticed and relayed to the drive, that you appreciate and can see the hard work they put in.

There are many reasons why good relationships between companies and their drivers can, at times, be challenging. However, what comes down to it is trust and transparency. To learn more about driver retention, contact us today!