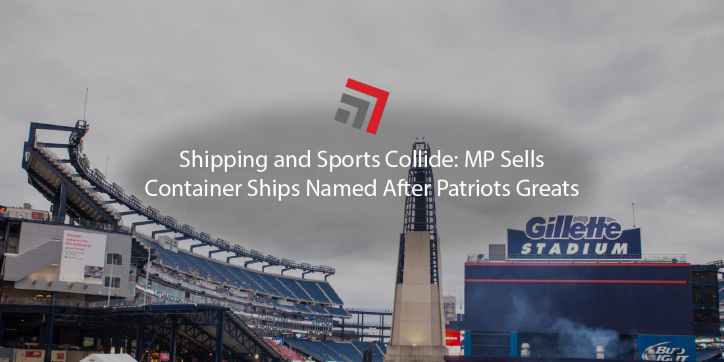 Back in 2017, Mangrove Partners acquired seven container ships when values were low (pre-COVID) and now because of the current market conditions (and a case of good luck), the container-ship values have dramatically exploded. Now according to Freightwaves it has been reported that they sold six of them at extremely high prices.

The fun and intriguing part about this news is once Mangrove purchased its ships, they decided to rename them after former or current members of the historically dominant New England Patriots. If you are not familiar with the history of the New England Patriots, Coach Bill Belichick and former Patriots Quarterback, Tom Brady (who is now with the Tampa Bay Buccaneers), made the Patriots a dynasty in the NFL and have won 6 super bowls together.

Shown below are the six container ships sold and named:

MP The Brady: Named after 7-time super bowl winning quarterback, Tom Brady, who is now with the Tampa Bay Buccaneers. Built 2005, 5,060 TEUs. Bought for $7.5 million and just sold for 8 times the purchase price.

MP The McGinest: Named after Willie McGinest, a linebacker with the Patriots through 2006. Built 2010, 4,400 TEUs. Bought for $12.2 million and sold for four times the purchase price.

If you are in the market for a new container ship, Mangrove Partners still has one left to sell; a 2009 built, 4,360 TEU, MP The Brown – assumed to be named after former wide receiver Troy Brown.

If you would like to contact us with any questions or comments you may have, please reach out to a team member today!