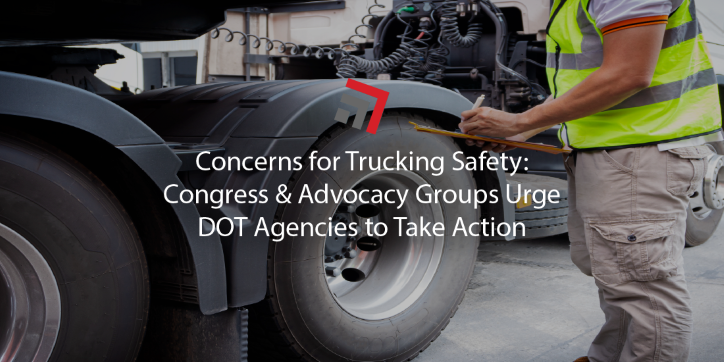 Trucking safety advocacy groups and the U.S. House Appropriates Committee are voicing shared concerns over failures by federal agencies in the implementation and oversight of rules governing truckers. Ultimately, they assert the overall safety in the trucking industry is being put on the line.

Last November, the U.S. Department of Transportation (DOT) released brief framework outlining its strategy and objectives over the next four years. Safety was among one of the six goals highlighted by the DOT. The safety goal was overall defined in a short summary: “Make our transportation system safer for all people. Work toward a future where transportation-related serious injuries and fatalities are eliminated.”

Criticism of the U.S. DOT and Calls to Improve Truck Safety

The framework, submitted for public comment, was met with critiques from several advocacy groups. Among them includes the Commercial Vehicle Safety Alliance (CVSA), whose members include local, state, and federal truck safety officials. FreightWaves reports the CVSA’s scathing evaluation of the Federal Motor Carrier Safety Administration (FMCSA), an agency within the DOT. In a statement, the CVSA claims the FMCSA “has fallen behind on its core responsibility of maintaining the federal safety regulations.” Moreover, the CVSA cites this responsibility of the agency as a primary method to improving truck safety. “As a result…we have outdated and sometimes conflicting regulations that have not kept pace with the state of the industry,” the group continued.

Aside from advocacy groups, the House Appropriations Committee, in the U.S. House of Representatives, laid out a list of objectives for the DOT to act on. This occurred recently during the congressional committee’s discussion of the department’s 2022 fiscal budget. However, as FreightWaves points out, the DOT and its agencies are under no obligation to follow up on these objectives. Rather, it is a signal for potential legislative proposals for this year.

Among the congressional committee’s appeal towards the DOT, are calls for the FMCSA agency to address certain concerns affecting the trucking industry. Courtesy of FreightWaves, here are highlights of key issues that hope to be alleviated.

Back in September 2020, hours of service (HOS) rules went into effect that considerably extended driving time and distance for truck drivers. The committee asserted its concerns of the significant risks to safety these rules bring along.

The committee also calls on the DOT to outline procedures that determines whether a driver is fit to safely operate a commercial truck. This includes driver compliance with demonstrating safety fitness and specific procedures the DOT can use to ascertain whether the driver is fit for operations.

The committee made clear its concerns of the FMCSA’s IT. From its report , the committee was critical of the FMCSA and its “legacy of layered, antiquated systems” that remain “a stumbling block” for the agency. Furthermore, FreightWaves reports that the $65 million appropriated by the committee towards the FMCSA should be used for IT management.

Whether the DOT and its agencies reciprocate these demands from Congress and advocacy groups, the challenges in the trucking industry remain critically relevant to the U.S. supply chain.

Please reach out to one of our team members for up-to-date information on all issues affecting domestic logistics within the U.S.