No Driver, No Problem?: Self-Driving Trucks and Their Pros and Cons on the Industry 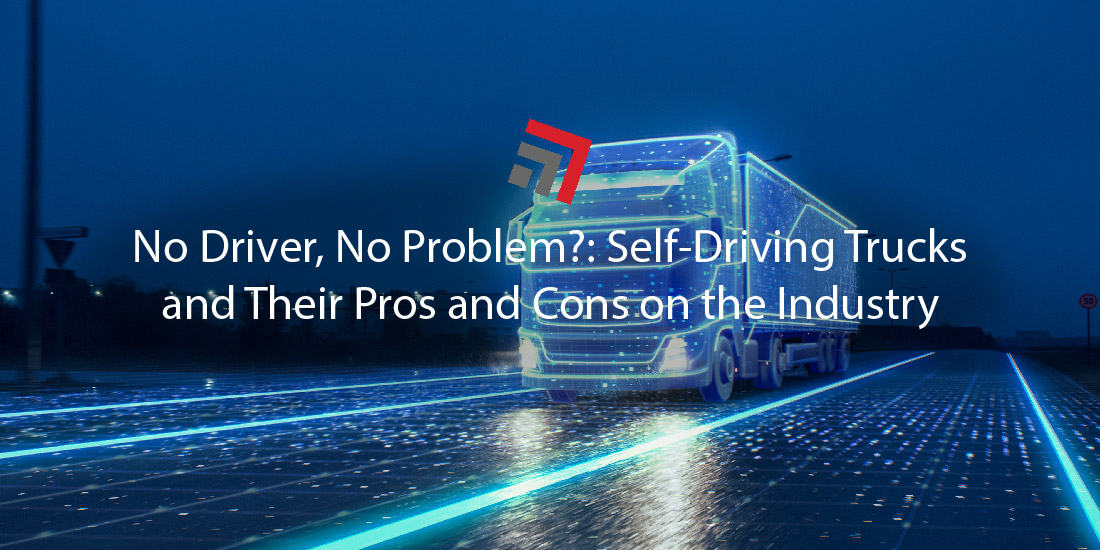 All industries eventually come to an innovative crossroad. The trucking industry is no exception. As trucking negotiates a severe driver shortage, the implementation of autonomous (self-driving) commercial trucks are at the forefront of discussion in an industry looking for solutions.

Just this past December, autonomous trucking startup TruSimple completed its first autonomous truck run on open public roads without a human in the vehicle, reported by TechCrunch. The inaugural trip in Arizona covered 80-miles from Tucson to Phoenix. The success of this operation has breathed new life into discussion of autonomous trucks. Whether it is arguments for it or against it.

With demand soaring to new heights, the benefits of autonomous trucks are leading discussion in an industry that is looking for innovative solutions. Global manufacturer ICL Group projects autonomous trucks will aid in businesses getting items to their customers more efficiently and economically.

Moreover, Sterling Anderson, co-founder of Aurora Innovation Inc., agrees that the benefit to the industry is “enormous”. Per Supply Chain Brain, Anderson claims an autonomous truck could move cargo from Los Angeles to Dallas in 24 hours non-stop. This route normally takes a human driver two to three days to complete. “Human drivers, by our nature, have to eat, sleep, and take breaks,” Anderson reasoned.

Another benefit proponents implore is the safety this technology can bring to the roads. Every year, commercial trucks are involved in countless crashes that result in numerous injuries and deaths. In 2018 alone, National Highway Traffic Safety Administration (NHTSA) statistics startlingly reveal around 5,000 Americans died in accidents involving commercial trucks. Additionally, from this report, it is estimated that over 90 percent of these accidents were caused by human error.

Proponents argue autonomous vehicles will reduce the number of accidents as human error will be ruled out. Furthermore, in an article from Rosen and Ohr Law these self-driving vehicles would have data from sensors on board warning them of any problems well in advance.

Autonomous trucks also can plan routes to avoid driving during peak hours. An article written in advocation for these machines by the World Economic Forum wittingly states, “Robots don’t mind being on the road at 3am instead of 3pm”. In theory, this will alleviate traffic during the day since commercial trucks make up a significant number of vehicles on the road.

Perhaps, what comes to mind first is the job security of truckers and how this new technology will affect their positions. From Rosen and Ohr Law, truckers, themselves, worry as this process to automation matures, more and more of them will be replaced by computers.

Many advocacy groups for truckers assert there is a smooth transition in the industry to driverless trucks to avoid social disruptions from significant job loss. Fleet Owners highlights these groups’ desires for the government to consul with labor unions, road freight businesses, and manufacturers to best determine policies that ensure costs, benefits, and risks from automated technologies are “fairly distributed”.

Another disadvantage are the legal issues attached to insurance and legal liability for autonomous trucks. While these machines promote cutting-edge capabilities that eliminate human error, this technology is relatively new to scene and is still being tested. What happens if an autonomous truck causes an accident?

Courtesy of Rosa and Ohr Law, several questions emerge from this potential scenario. In the event of an accident, who will be legally responsible? If an accident causes injuries or death, who will be held accountable? These questions surface the reality of system-error and how it must be addressed should autonomous trucks engage on roads and highways across the country.

Safety advocates echo similar concerns to Supply Chain Brain, saying the technology is still unproven and it may lead to more fatal crashes. The thought of an unmanned commercial truck weighing 80,000 pounds barreling down U.S. highways is frightening in their eyes.

In conclusion, proponents of autonomous trucks assert it is a more efficient and safe way of engaging in commerce on the roads. While opponents cite autonomous trucks will threaten thousands of jobs and are still being a tested technology. Please do not hesitate to contact one of our team members if you have any further questions on this topic or any others in domestic logistics.