All Things Considered: Hearing on STB Regulations for Freight-Rail Industry 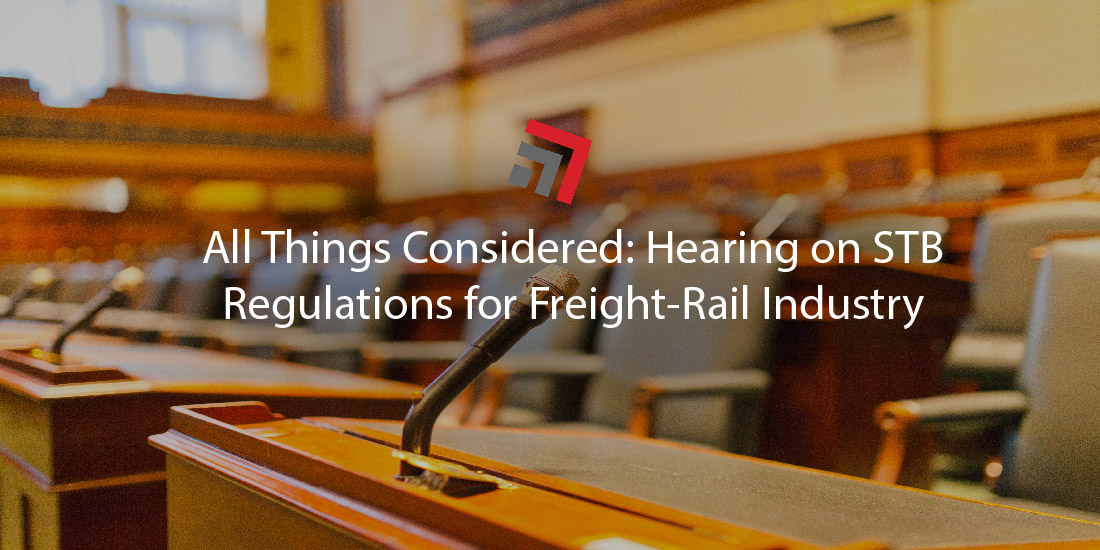 The U.S. House Subcommittee on Railroads, Pipelines, and Hazardous Materials has jurisdiction over the economic and safety regulation of railroads and the subsequent agencies that administer those regulations. The Surface Transportation Board (STB) is one of the more powerful related agencies as the five-member board has the authority to address any pertinent issues affecting the nation’s rail transportation system.

The scope of the STB’s influence and its role in regulating the freight-rail industry was called into question as the subcommittee held a hearing last month to gather feedback from industry stakeholders. Subcommittee Chair Donald Payne Jr. (D-NJ) prefaced in the hearing that this proceeding came as the subcommittee’s members were preparing for STB reauthorization legislation.

Present at the hearing, whether in-person or virtual, were stakeholders from all corners of the freight-rail industry each representing different views and opinions. Among the participants included:

Class I railroads and their adoption of precision-scheduled railroading (PSR) was a recurring topic throughout stakeholder testimonies. Those who advocated for broadened oversight from the STB over the freight-rail industry used PSR as the poster child for their arguments.

Per his testimony, Dennis Pierce, representing the BLET labor union, accosted Class I railroads and the PSR model: “[PSR] is not precise, not scheduled, not railroading”. He proceeds to list grievances from union members (railroad employees) within the industry, such as working on call with no set schedule and harsh attendance policies, that are “destroying the family lives of [BLET] members”. This had led to many employees leaving their positions and fleeing from the industry entirely.

Additionally, from his testimony, Pierce refers to the Transportation and Infrastructure Committee’s calling for a study about PSR’s effects in wake of a “myriad” of complaints from shippers, the public, and the industry alike. Pierce notes that not all railroads and railroad management particularly wish to use the PSR model, however he concludes his opening remarks that “Wall Street calls the shots; [those] who don’t go along with this approach leave or are forced out”.

Congressman DeFazio, who chairs the Transportation and Infrastructure Committee, provided a parallel assessment. “Wall Street Pressure to cut costs and maximize profit for shareholders has put the freight-rail industry in a deteriorating state,” he implored at the hearing, which was uploaded to the committee’s YouTube page.

Further in his testimony, Pierce is optimistic that the STB can responsibly regulate railroads “by handling service complaints in a timelier and more effective manner” without the agency adversely interfering in industry commerce. Rather, Pierce believes mandating and enforcing regulative measures onto railroads will restore sufficient employment levels and in return promote better service.

AAR’s Testimony, on behalf of Class I Railroads

Coming to the defense of Class I railroads, AAR President and CEO Ian Jeffries begins his testimony, warning that “overreaching, unnecessary regulations by the STB will put our nation’s rail advantage at risk”. Furthermore, he contests that freight railroads provide a “24/7 critical link” to the nation’s supply chains. In order to maintain fluid operations and ensure there is enough capacity to meet economic demands, Jeffries notes that additional regulative measures will ultimately hinder the quality of service from railroads and “undermine the efficiency of supply chains”.

Jeffries surfaced a claim that many advocates for increased regulatory measures make. Many will say since railroads are well-off financially, they can “afford more onerous regulations” and that increased oversight is an essential responsibility and role of the STB. Jeffries rebuttals this point by saying: “Penalizing success is a bad public policy”. Later in his testimony, he advises that “more regulation does not result in healthy railroads”.

Jeffries concluded his testimony with the phrase, “If it isn’t broken, don’t fix it”. While he did not directly go in detail about the PSR model and its reported effects on railroad management and employment, Jeffries assures that under “balanced” STB regulation over the past several years, America’s freight railroads have been able to produce “the best national freight rail system in the world”. He calls on the congressional subcommittee to ensure the STB does not “unwisely” expand rail regulation.

Overall, such hearings allow for all stakeholders in the industry to provide their perspectives and what is best for freight-rail going forward. For a closer look at the hearing and further reading of individual testimonies, click here.