Autonomous Shuttle System for Moving Freight via Rail: The Port of Houston Partners with FSX to Explore Possible Implementation 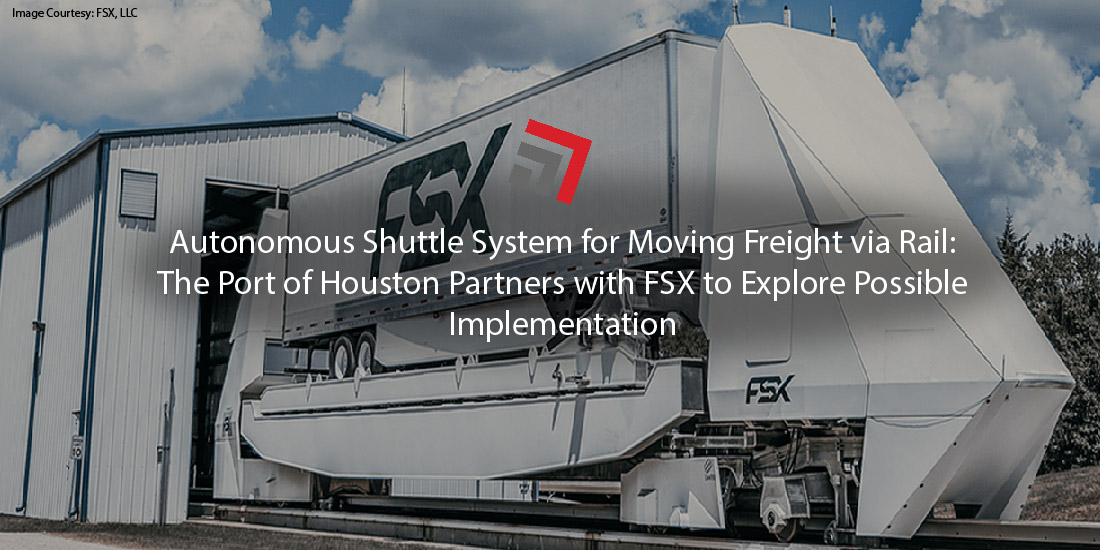 There’s much ado about discussion of autonomous technologies in the trucking industry. Whether it’s shippers automating freight procurement processes or carriers investing in self-driving technologies for fleet vehicles.

How about for rail?

The Port of Houston Partners with FSX, Developer of the Freight Shuttle System

The Port of Houston looks to see how autonomous technology can optimize its operations through rail. The Gulf Coast port announced at the beginning of May an agreement with FSX, LLC. From a published release on the port’s website, this agreement permits the two parties “to pursue and explore opportunities to connect shore-side container facilities to more inland locations via the proposed freight shuttle infrastructure”. This agreement has been approved by the Port Commission.

FSX has developed an autonomous and electric rail system which has drawn the eye of the Port of Houston, hence the newfound partnership. The two parties are now investigating infrastructure that can deploy FSX freight shuttles capable of transporting containers from the port grounds up to 500 miles inland without the use of traditional railcars or trucks. The system has never been deployed before.

Texas-based FSX told the Journal of Commerce (JOC) that a fully scaled network of this shuttle system could move up to 10,000 containers per day.

FSX is optimistic that the agreement with the Port of Houston will allow them to explore and pinpoint how exactly this groundbreaking technology can be implemented into port operations. No concrete plans between the company and the port have been laid out yet, however as congestion continues to plague most U.S. ports and domestic lanes of travel, the two sides are surely motivated to get the ball rolling.

Michael Yager, chief development officer for FSX, told the JOC that the company’s shuttle system presents a “new mode of transportation for freight” in wake of ongoing congestion and spiked demand that prevents truckers from moving freight profitably on many lanes. FSX emphasizes that it is not looking to replace traditional modes, like trucking, but rather “serve as a relief valve” that will add needed capacity to ports. In other words, this newer mode will be complimentary in supporting the bottleneck of moving goods.

How Does this Freight Shuttle System Work?

Via Business Wire, Jessica Franklin of FSX says, “FSX Freight Shuttle have been developed to provide a low-emission alternative to moving freight in heavy freight corridors or ports of entry”.

From the JOC, the company’s system deploys an autonomous shuttle that is capable of carrying one intermodal container or 53-foot truck trailer over a dedicated two-way track. The shuttle is similar in looks to a traditional railcar. However, unlike railcars, the shuttle does not have a flange on the inside (which traditional railcars have to stay on tracks) for its wheels. Rather, the shuttle dons horizontal wheels instead fulfilling the same purpose to keep itself on the track.

The shuttle would transport these loads via “emissions-free, electric-powered transporters on elevated guideways in highway or other rights-of-way”, according to Franklin. The shuttles would essentially be pulled by a magnet along the tracks and possess top speeds of 65 miles per hour. Each shuttle would be equipped with a GPS and wireless communications.

The shuttle system would transport the container up to a certain destination, whether that’s an inland port or intermodal terminal. From there, last-mile delivery would still fall onto truckers to carry out.

How Much Will this Freight Shuttle System Cost?

The visual of this system fully realized and implemented into real life is enough to stimulate anyone’s imagination in transportation. However, adopting an entirely new mode of transport and constructing the necessary infrastructure to support is not a cheap affair.

Yager told the JOC that the shuttle’s elevated tracks would cost about 15 million dollars per mile (depending on the system’s length). Additionally, the shuttles, terminals, and other related infrastructure will tally on another 10 million per mile. FSX would be in charge of operating the shuttle system and, according to Yager, the company would charge a throughput fee to shippers for each container delivered.

Yager reasons an investment into this system is a worthwhile venture considering increasing trucking costs and delays at ports. He also reiterates that this is not intended to compete with trucking and that it will not take away jobs from that industry. The systems would only be built “where it’s no longer feasible to move freight efficiently”.

The Port of Houston’s Executive Director roger Guenther is optimistic this partnership with FSX will assist in the port’s goal to reduce emissions and reach net-zero by 2050. Courtesy of the Greater Houston Port Bureau, Guenther said, “We continue to think out of the box and take a hard look at technologies like the freight shuttle that may provide tremendous benefit for more efficient freight transportation”.

The Port of Houston’s partnership with FSX to further explore and potentially implement this system into its operations provides another example of the freight industry embracing new and ambitious technologies. With these technologies may come intimidating costs and investments, however they may also provide effective solutions to challenges that cannot be ignored.