Above-Average Hurricane Season Forecasted for 2022: The Impacts for Trucking and How Truckers Can Prepare 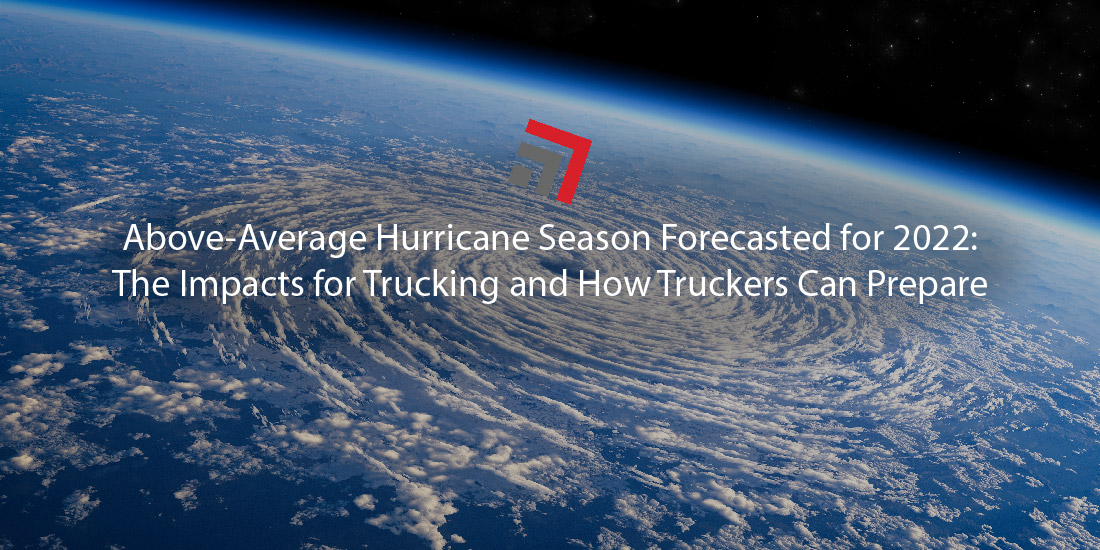 June may best be known for the start of summer. All across the country, sunny days seem more common, and everyone can bask in the dry heat and gentle breezes the month provides.

On that note, it’s not an entirely placid time of the year as severe weather threats remain rumbling throughout the country. For truckers, who carry freight across the country’s roads and highways, hazards, that a few months ago were blizzards and icy conditions, take on a new form in torrential rainfall, hailstorms, and hampering winds.

If that wasn’t enough, the annual coming of June also marks the grim beginning of hurricane season. Hurricanes are critically severe weather events that bring with them life-threatening conditions and costly damages.

For the trucking industry, hurricanes are a nightmare scenario. Aside from the grave price carriers pay from delays in service and freight movement, their fleets and drivers can be put it in the crosshairs of these deadly storms if carrier operations are not fully prepared beforehand.

Every year, carriers should note that hurricane season starts when they flip their calendars to June. However, if they haven’t before, now’s the year to do it.

Forecasters at the NOAA’s Climate Prediction Center, a division of the National Weather Service, are predicting above-average hurricane activity in the 2022 Atlantic hurricane season, which officially runs from June 1 to November 30. Specifically, the NOAA attached a 65 percent chance of this above-normal season occurring.

Such an outlook translates to a forecasted range of 14 to 21 named storms (winds of 39 mph or higher) in total. Of that number, six to ten of these storms have the potential to become hurricanes (winds of 74 mph or higher), according to the NOAA.

The most startling takeaway from this forecast, is the prediction that three to six major hurricanes could slam the U.S. East Coast seaboard this year. The NOAA defines this weather phenomenon as any hurricane sustaining winds higher than 111 mph. In other words, a storm of this power would be designated as a Category 3, 4, or 5 hurricane. Categories are essentially groupings used to rank how powerful a hurricane is by its wind speed. If a storm system becomes a hurricane, it will be assigned a category from one to five.

From its news release, the NOAA provides these ranges with a 70 percent confidence.

While hurricanes spend most their livelihood out on open water miles off the coast, it may appear to be an issue affecting maritime logistics primarily. However, once these powerful storms breech the coast, their direct impact can be felt miles inland.

Many popular and relied upon lanes of travel straddle the coasts of the Atlantic Ocean and Gulf of Mexico. For truckers hauling freight in the deep south or eastern U.S., it’s crucial that in the event of an imminent hurricane to understand the storm’s projected path and how it coincides with their trucking route. Among others, notable lanes include:

How Truckers Can Prepare

Whether a hurricane is on its way or not, truckers should always prioritize their safety. Like any other hazards, truckers deferring to their better judgement of a situation goes a long way in protecting them and their vehicle.

Watch out for Flood Zones

If there are forecasts of a hurricane, torrential rain is most likely on the menu. Truckers should avoid driving through or parking their vehicles in potential flood zones. By seeking out higher ground, they can decrease their chances of having to negotiate flood waters.

Ensuring their Vehicles are Fully Fueled

Keeping an eye on their truck’s fuel is also critical in the event of a hurricane. Truckers should ensure that their vehicles are topped off. If their vehicles are running on a near empty tank, rerouting around or evacuating a certain area will be challenging, especially if fuel stations are out-of-service or congested with other vehicles trying to fill up.

Stay Up to Date with Weather Forecasts and Advisories

Typically speaking, hurricanes do not make surprise appearances. Thanks to forecasting models and other storm tracking technologies, a hurricane’s projected path can be reliably tracked from one to five days out.

The main concern lies in volatile nature of these storms. Hurricanes can gain or lose strength throughout their path. Once these storms make landfall, how exactly damaging they will be to surrounding infrastructure cannot be fully predicted.

That said, truckers must stay up-to-date and heed safety advisories and travel restrictions as they come. As U.S. Secretary of Commerce Gina M. Riamondo puts it:  “Early preparation and understanding your risk is key to being hurricane resilient”.

Riamondo also says that “NOAA experts will work around-the-clock to provide early and accurate forecasts and warnings”. A source truckers, and carriers, can rely on is the NOAA’s Hurricane Weather Research and Forecast Modeling System, which provides several forecasts of a hurricane, or tropical storm, and its projected route of travel.

At the end of the day, the trucking industry should expect considerable delays in operations should a hurricane be on the forecast. For truckers, it’s important to adhere to these tips and prioritize their own safety.