Turning an Idled Terminal into an MLB Stadium? Mixed Reactions from the Oakland A’s and Stakeholders in the Maritime Industry Remain 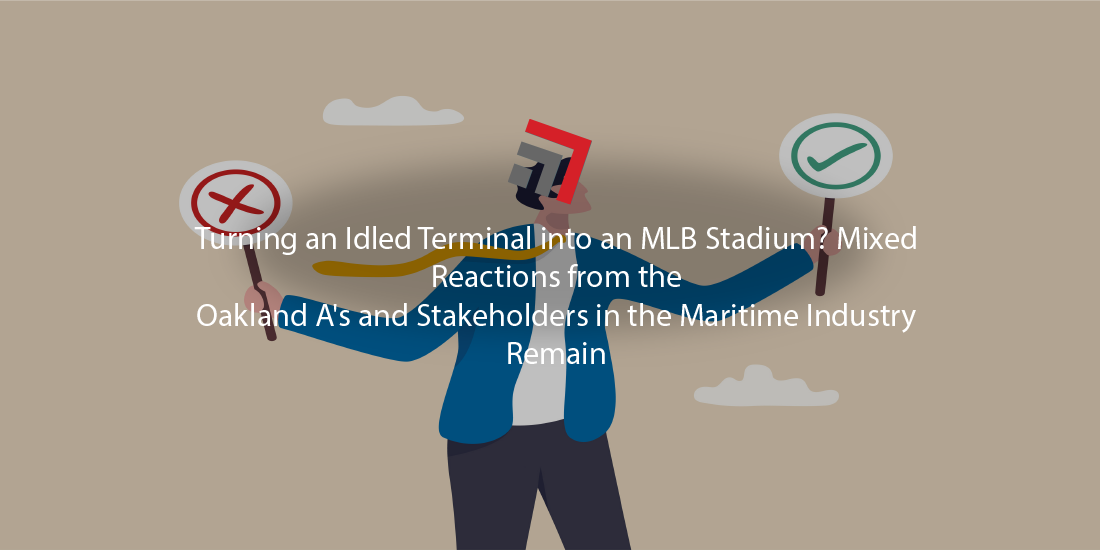 Howard Terminal, an idled 55-acre site that is in between a complex of larger Port of Oakland facilities and Jack London Square, is being seen as an option for the Oakland Athletics to build their new stadium there. The Howard Terminal is not used to unload ships anymore, but the terminal now serves as a truck parking lot, a pop-up container yard and a training site for dockworkers, Bloomberg reports.

However, mixed reactions remain from stakeholders on both sides.

Why turn an idled terminal into an MLB stadium?

The Oakland Athletics, a professional baseball team, are desperately trying to find a new location to a build a new stadium for their team, as their stadium, the Oakland Coliseum is aging and feeble.

Enter Howard Terminal, where the Oakland Athletics have put together a $12 billion plan to a build a baseball stadium and real estate development, that would be on a collection of industrial waterfront, owned by the Port of Oakland.

In addition to a new stadium, the Howard Terminal plan, would include 3,000 housing units, 1.7 million square feet of office and retail space, a 400-room hotel, and more.

Not everyone is thrilled about this, with many in Oakland’s maritime industry remain resistant to this potential MLB stadium being on the waterfront. Bloomberg reports that groups representing truckers, ocean carriers, terminal operators, dockworkers, and other port-related businesses have argued that the development will cause major impacts to both the surrounding community and port operations, adding more to the supply-chain issues and causing the port in Oakland a dramatic blow to the economic prospects.

Additionally, C. Patrick Heidkamp, an Economic Geographer at Southern Connecticut State University, warns that the decision to develop the Howard Terminal into a stadium and real estate development could cause more harm to the supply chain that would be difficult to undo.

“To put a use that is not coastal-dependent on the coast to me is one of the biggest mistakes we can make knowing what we know,” he says.

“We’d be crazy not to consider it”

Danny Wan, an Executive Director of the Port of Oakland said in an interview, “they would be crazy not to consider it,” continuing, “as the area is too small and shallow for the massive container ships that now arrive at the port, in addition to being too far into the San Francisco Bay.” The Port has approved the Athletic’s plan to move to the terminal.

The Mayor of Oakland, Libby Schaaf says the Port is still on track to meet its growth goals by 2050 and noted that the port has nearly doubled its capacity in recent years with the additional of a former army base into a 185-acre logistics complex, Bloomberg reports.

Additionally, the A’s President Dave Kaval says the project won’t interfere in maritime operations. Instead, he hopes will bring people back to a “blighted and abandoned” part of the waterfront, Bloomberg reported.

Will it or will it not happen?

Time will tell if this project actually happens or not. Regardless of if it happens or not, many reactions will be felt all around. We will continue to provide updates on the latest in the industry and more throughout the year and beyond. If you have any questions or comments regarding this topic, or anything else, please don’t hesitate to contact our team today!