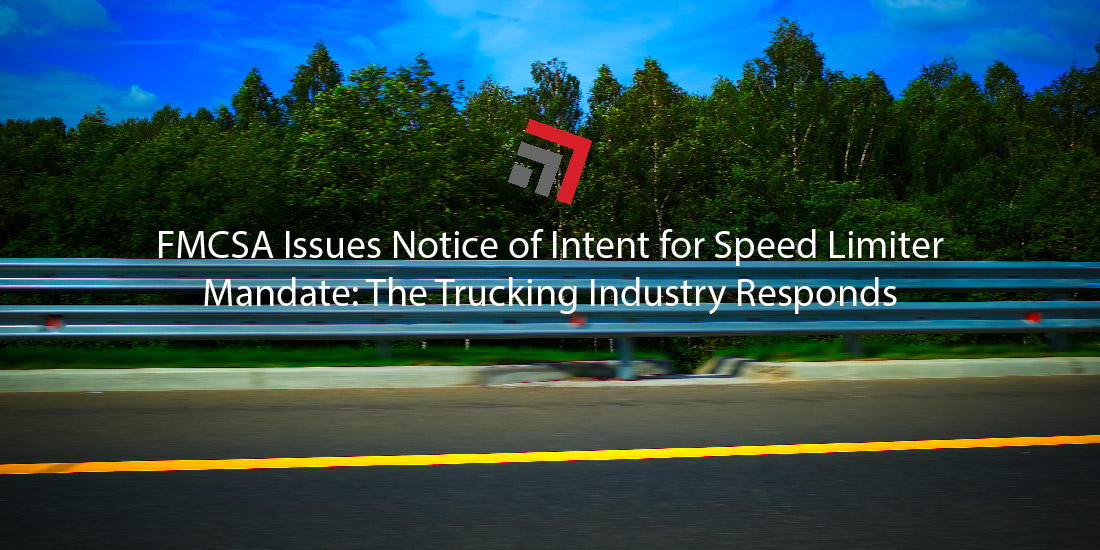 On April 27, the FMCSA published and released a Notice of Intent (NOI) document announcing the agency’s plans to propose that any commercial vehicle with a gross vehicle weight of 26,001 pounds or more be equipped with an electronic engine control unit (ECU) that will be capable of governing speed to a certain limit. This exact speed limit will be determined by a rulemaking process.

From a release, the FMCSA reasons moving forward with this rulemaking because of concerns about the number of commercial motor vehicle (CMV) crashes and fatalities traveling at high speeds. The government agency supports this claim citing annual data from 2019 that reported 860 fatal crashes in areas with posted speed limits of 70 to 75 miles per hour. It deduces from these statistics that imposing speed limitations on CMVs will reduce crashes and save lives on the nation’s roadways.

The release also adds that the NOI announces the FMCSA’s commitment “to proceed with a supplemental rulemaking proposal and request public comments on the issue”.

As stated, the FMCSA opened up the floor for a period of public comment after issuing its speed limiter NOI. According to CDL Life, the agency specifically requested comments on more practical elements of this proposal, such as the programming or adjustments of ECUs. However, the general commenting public were more interested in voicing their opinions about the speed limiter proposal in the first place.

Due to the high engagement of feedback, the FMCSA has since extended the comment period by six weeks, up to July 18. As of June 14, Logistics Management reports that the agency has received more than 15,500 comments.

Industry stakeholders, from the Owner-Operator Independent Drivers Association (OOIDA) all the way to truck drivers and carriers, have all chimed in with their thoughts and opinions to what has shaped into a polarizing debate.

Stakeholders In Favor of the Speed Limiter NOI

Perhaps the most notable proponent of the FMCSA’s proposal is the American Trucking Associations (ATA). In a news release, ATA President Chris Spear gave glowing approval: “ATA is pleased that the FMCSA is pursuing a constructive, data-driven approach to the issue of truck speed limiters in its latest proposal”. He goes on to write that the ATA will thoroughly review the proposal and will work with the agency to shape a final rule that aligns with its policy surrounding speed limiter use.

Speed limiters are also not an alien technology to some companies and carriers. The Trucker notes that Walmart tops the maximum speed of its CMVs at 65 miles per hour.

Moreover, Gary Garrison, president of Allstar Fuel, reasons safety as the primary reason for using speed limiters for Allstar’s CMVs. “If you are involved in collisions, the slower speed does have a safety element,” he told The Trucker.

Jerry Tolin, a truck driver, agrees to the safety impacts this ruling could bring. “I do think that semi-trucks should be limited to a certain speed maybe 65 to 68 mph because I see a lot of trucks speeding out there,” he wrote in his public comment for the proposal. “I am a truck driver myself and we are governed at 68 [miles per hour] where I work. I think that’s a pretty good speed for safety and the motoring public”.

Coupled with observed safety benefits, the U.S. Department of Energy reports fuel efficiency rapidly decreases with higher speeds over 60 miles per hour. In other words, this is likely an incentive for companies and carriers who decide to regulate a certain speed limit for its CMVs.

Stakeholders Against the Speed Limiter NOI

While OOIDA has not publicly announced its opposition yet to the ruling, the organization has had long-standing disapproval for mandatory speed limiters in the past. Courtesy of Logistics Management, OOIDA has called split speed limits between CMVs and regular automobiles a bad idea. In other words, the organization asserts if CMVs are mandated to a set speed limit, increased interactions between passenger vehicles and these larger trucks will occur.

One commenter posted, “All [the proposal] will do is impede traffic in places where the speed limit is higher than the truck’s speed…making driving a truck more dangerous for the truck driver because cars around it will be making aggressive maneuvers to get around it”.

The concern shared in this particular comment is echoed in many others. Truck drivers especially voiced similar opinions. One driver wrote: “We get cut off constantly by irate drivers because we passed someone and took too long. Limiters will make it longer to pass people and also less speed makes it more dangerous to merge or get out of an emergency vehicle’s way”.

Many comments from alleged truck drivers also punctuate a frustration of being told how to do their job. As professionals at what they do, many do not believe the FMCSA should infringe on their own judgments behind the wheel. The Trucker highlighted the comments of Arkansas driver Ray Simmons: “I am a professional driver. Let me do my own thing…I don’t need anybody telling me how to drive”.

Those opposed to the ruling also point out if speed limiters are imposed, drivers may see unintentional pay cuts. Typically, long-haul truck drivers are paid by the mile, not by time. If drivers are limited to certain speed, they will cover less distance over a period of time thus accruing less pay.

Logistics Management reports at this time that Canadian provinces Ontario and Quebec are the only two jurisdictions in North America to require speed limiters (set at 68 miles per hour).

Going forward, the FMCSA will keep available its period for public comment up until July 18. After that, the federal agency will come to a final rule. Typically, it will make some tweaks to the proposed rule before it is supplanted into the federal code. From there, the U.S. Department of Transportation (USDOT) will be responsible with enforcing the new regulation.