Direct Connection Between the Great Lakes and Europe: A Potential Shipping Alternative with Needed Infrastructure Upgrades 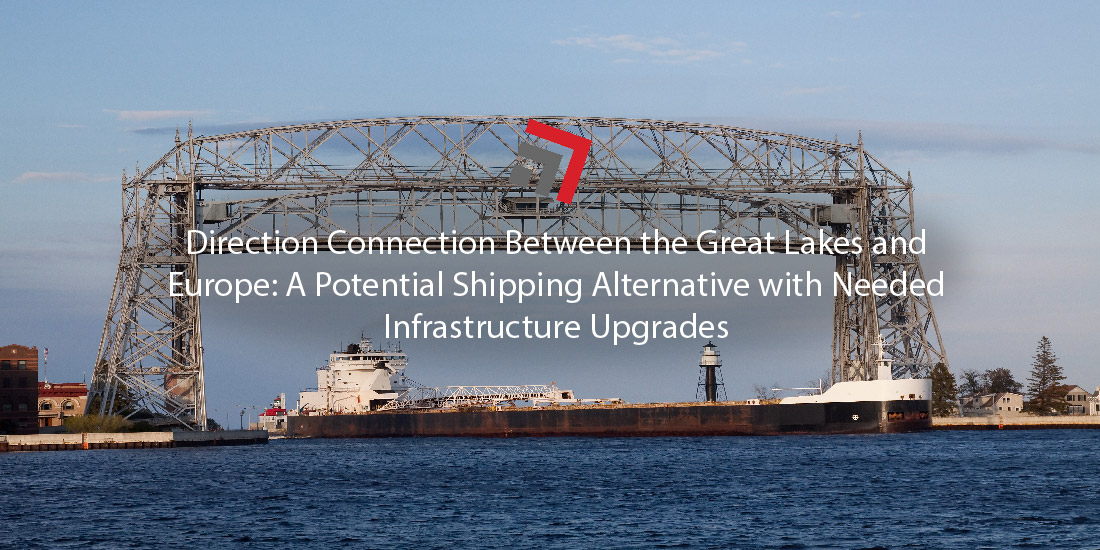 If the word great is in something’s name, it likely reflects how important and influential that one thing is. While the Great Lakes of the U.S. were coined this descriptor due to their sheer size, the word also is apt to its role in American transportation and commerce.

The Great Lakes comprise of five large bodies of water: Lake Superior; Lake Michigan; Lake Huron; Lake Eerie; and Lake Ontario. Common cargoes shipped on these lakes are raw materials like taconite, limestone, and coal. Historically, the Great Lakes have been a crucial gateway for transporting necessary supplies to the steel mills of the automotive industry.

Direct Connection Between the Great Lakes and European Ports

Any talk of expanding shipping through the Great Lakes starts with its two prominent ports of Cleveland, Ohio and Duluth, Minnesota. From Maritime Executive, this includes the latter port developing containerized dry bulk of agricultural exports to Europe. The continent across the Atlantic has seen increased demand for containers of agricultural produce.

The Port of Cleveland has thrown its hat in the ring already when it implemented a direct service to Antwerp, The Netherlands. The American Journal of Transportation (AJOT) echoes statements from a report that “a comparatively small container ship of under 1,000 TEU (twenty-foot equivalent unit)” has been able to move containers between the Dutch city and Cleveland with rates that compete with alternative options. The primary one being a much larger container ship sailing from Antwerp to Newark followed by a high-cost railway connection to Cleveland, AJOT continues.

In other words, rerouting directly to ports on the Great Lakes could save on what would otherwise be costly intermodal connections via rail from U.S. East Coast ports.

The Port of Duluth, which is nestled on the far west end of Lake Superior, presents an even more alluring opportunity. Maritime Executive notes that between Newark and Duluth a railway distance of 1,250 miles is involved. A direct Duluth to Europe connection would omit this lengthy journey by rail.

Infrastructure Priorities for the Great Lakes

Surely, this all sounds good on paper, but the idea of simply rerouting direct connections to Great Lakes ports is not as straightforward as it sounds. If there is increased marine traffic from direct European to Duluth connections, the Great Lakes ports and their related infrastructure will have to be up to the task.

Steve Fisher, Executive Director of the American Great Lakes Ports Association (AGLPA) discussed the infrastructure priorities for Great Lakes ports on a May 18 panel hosted by the Propeller Club of Northern California. Right off the bat, Fisher highlights the infrastructure already in place and the maintenance it requires. “There are 16 deep-draft, navigation locks that a ship has to pass through to go from the Atlantic to Duluth, Minnesota,” he explained.

The following are a few infrastructure priorities he listed:

Fisher noted in the panel, which was held over Zoom, that the Great Lakes ports currently have a $930 million backlog in maintenance with $405 million of it relating to dredging projects that need to be done. A good chunk from that total is also $300 million needed for repair and replacement. As Fisher puts it, “There are a lot of navigation structures in the Great Lakes including jetties and breakwaters that needs to be done”.

Another critical factor brought up was curbing the weather-related impacts Great Lakes ports have braced in previous years. Fisher cited examples of the Port of Milwaukee completely flooding in 2020 due to a large storm and a 2017 event where the Port of Oswego was battered severely by a winter storm. Such weather events decimated these ports’ infrastructure and led to costly repairs.

Great Lakes locks in particular Fisher alluded to were the Sault Ste Marie Locks in Northern Michigan. Also known as the “Soo Locks”, these structures will require a complete overhaul that comes with the price tag of $1.38 billion. The current plan in place is to construct a new 1,200-foot lock to replace the two dated and older locks along the St. Mary’s River. Thanks to the large Infrastructure Bill passing last November, this intimidating cost has been funded and the mega project is already underway. Fisher forecasts that the new lock will be completed in five to six years.

Another priority of Fisher’s and the AGLPA is upping their capacity of icebreaking vessel fleets, which are operated by the U.S. Coast Guard. From January 15 to March 15, the Great Lakes close off navigation in order to allow these vessels to break up the ice and open up the lakes for shipping routes.

According to Fisher, the Great Lakes have experienced a shortfall in icebreaking, which slows maritime commerce on the lakes to a near crawl during the winter months.

Fisher implores that ice breaking is necessary months before the Great Lakes close and the months following when they open back up. Despite this crucial need, he cites the deficit in the number of icebreaking vessels they have at their disposal. “We have seen a decline in the [ice breaking vessel] fleet in the late 70’s. We had 14 icebreakers and that has gone down to 9,” he explains.

In response, the AGLPA is working with Congress to approve funding for new vessels to be constructed deployed for the Great Lakes. “Our customers…the steel industry, the ag [agriculture] industry need these waterways to remain open,” Fisher goes on to say.

The idea of expanding the Great Lakes ports as a direct cargo gateway to and from Europe is a worthwhile pursuit. The Port of Cleveland has already introduced direct service between Antwerp and, now, the Port of Duluth has entered into the same discussion. There are growing demands from customers in Europe for U.S. agricultural exports and shippers would enjoy having alternative, perhaps cost-effective, ways of routing to entertain.

However, Steve Fisher of the AGLPA presents a reality that the Great Lakes ports will need address areas of improvement to their port infrastructure, locks, and equipment deficits.