Fireworks Fizzled: How Some Cities Dealt with Cancellations or Postponements This Fourth of July Due to Supply Chain Issues, Shortages and Wildfire Risks 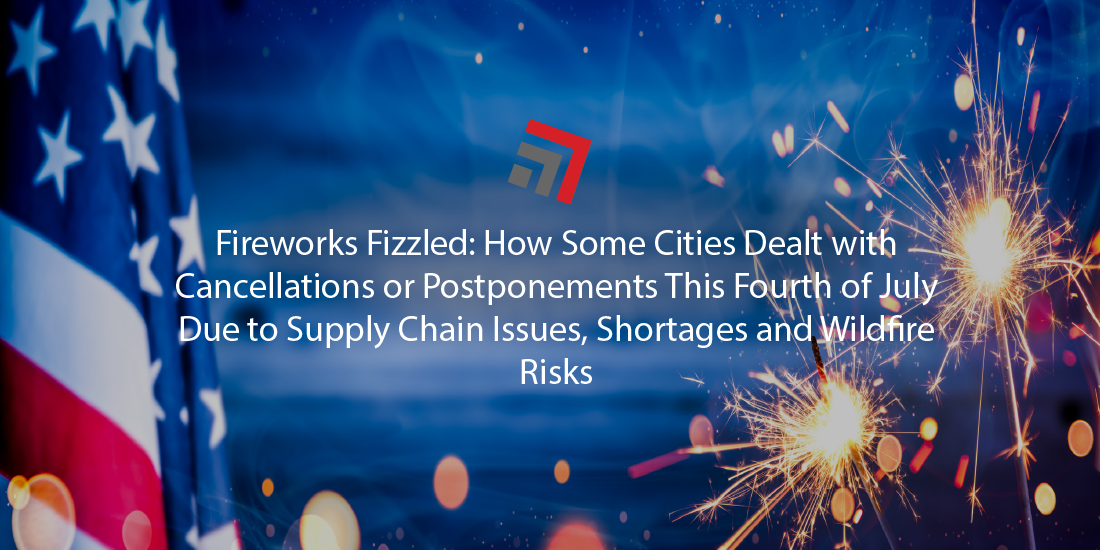 This past Monday was July 4th and with that holiday comes the inevitable display of fireworks. Supply chain issues, shortages, and wildfire risks are all reasons for the postponements and cancellations of fireworks for some cities. However, it’s not just fireworks that have seen shortages in some cities, but local workers who help put on the firework shows are in short supply as well.

For three major fireworks shows in Phoenix, Arizona this year, cancellations occurred – specifically due to the city’s contractor unable to find fireworks for the event in time because of the “ongoing supply chain issues”, the city said.

In Ottawa, Kansas fireworks are still stuck on a ship from China, the city says. The city of Ottawa will instead enjoy a fireworks show two months later, on Labor Day instead, reports VOA News.

The cost to ship fireworks have risen significantly since 2019 (right before the pandemic, in early 2020), with raw material costs jumping 20% and shipping costs potentially going from $8-10k to even up to $45k per container, Insider reported.

For other cities, labor shortages remained the issue of postponements or cancellations of fourth of July celebrations. With a lack of qualified pyrotechnicians, Fairfax, Virgina’s fireworks show was moved to July 5th, Matthew Kaiser, Communications Director of City Government told VOA News.

To be a pyrotechnician one much receive professional training, clearance with the Bureau of Alcohol, Tobacco, Firearms and Explosives. Additionally, one must get the product and drive the product to the site where the fireworks will go off at. However, in order to do that one needs to have a commercial driver’s license to handle such hazardous materials, VOA News states.

Minneapolis, Minnesota also skipped their annual fireworks show over the Mississippi River, due to staff shortages and current construction happening in the park, the city said.

After facing some wildfires during the Spring, Flagstaff, Arizona decided to do a laser light show instead of their typical fireworks display, Insider reported. Additionally, in Lake Don Pedro and Claremont, California, a drought has put their shows on a pause and instead locals are able to watching a free concert instead. According to Insider, around 650,000 gallons of water are required to wet the area where fireworks released, which is not allowed under their local water restrictions.

Maybe next year Fourth of July activities will go back to “normal”, and these shortages will be eliminated, but only time will tell.

Commerce Express hopes everyone had a wonderful Fourth of July. As always, we will continue to provide updates on the latest in the industry and more throughout the year and beyond. Should you have any questions or comments, please don’t hesitate to reach out to our team today!