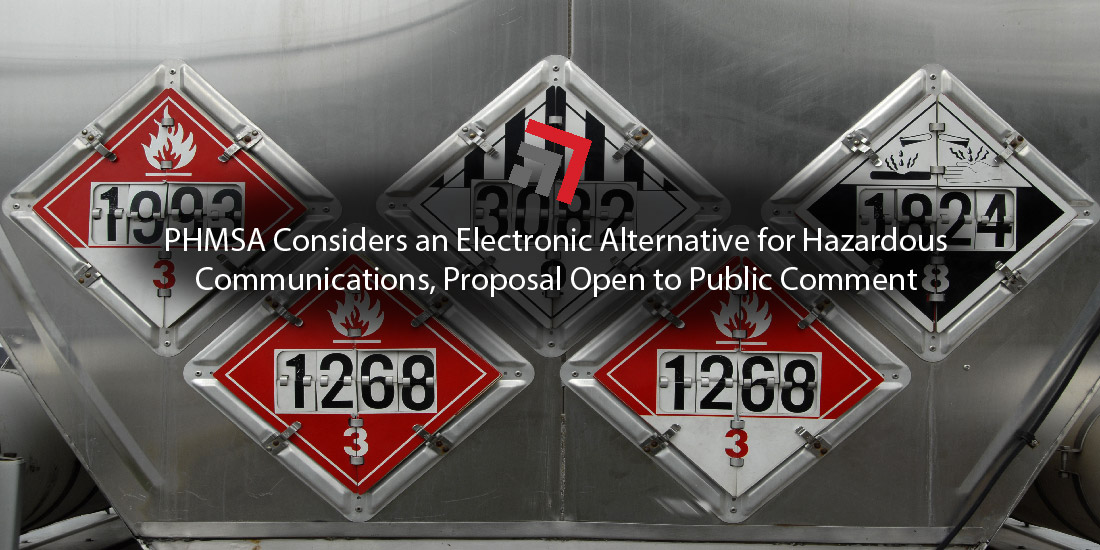 The Pipeline and Hazardous Materials Safety Administration (PHMSA), an agency under the U.S. Department of Transportation, published a request for information in the Federal Register on July 11 detailing its consideration of revising Hazardous Materials Regulations (HMRs). This change up would authorize the use of electronic communication as an alternative to current, physical documentation requirements for hazard communication, the PHMSA’s published document reveals.

Current HMRs require that any hazard communication must be maintained through physical, or printed, documents during transportation. Up until recent discussions, physical communications have been the gold standard with the prevailing thought that any alternatives would not be implemented.

However, the PHMSA reasons widely adopted technologies could supplement, or even replace, the traditional paper-based hazard communication system. The agency goes on to explain that migrating over to an electronic-based medium may optimize transportation operations and provide improved oversight, particularly to emergency response. If electronic access is made available to the same required information currently contained in hazard communication documents, the PHMSA hypothesizes that these improvements will be seen.

Public Comments to the Proposed Revision

Since its published release on the Federal Register, the PHMSA’s proposal has been subject to a period of public comment.

One commenter, Brian Brundige, representing a New York-based hazmat hauler, wrote that he is concerned with electronic communications for hazardous materials. He says hard (physical) copies of information and paperwork are the single most-effective means when a driver changes from one truck to another or if a load if passed on to a second driver who then assumes the responsibilities for transporting the same hazardous material.

Brundige goes on to explain that communicating critical information electronically will require a system within the vehicle or on the driver, such as a cellphone or tablet. He believes these electronic devices are prone to battery failure, breaking, or being locked which heightens his concern in the event of an accident where an emergency response is necessary. Brundige also adds possible legal issues for haulers if drivers use personal devices to store hazard communication. In the case of the driver unwilling or incapacitated, haulers could be presented a challenge of accessing and obtaining pertinent information efficiently.

A fellow commenter shared a similar sentiment to Brundige. Nick Wright, a part of Kansas state law enforcement and a CVSA certified general hazmat inspector, says increased reliance on electronic devices would hinder emergency responses. Akin to Brundige’s view, Wright asserts hard copies of documents “simply can’t be beat”. The inspector also notes how cellphones and other electronic devices typically lock after a short time to which he believes will also pose inconveniences to operations.

Wright later alludes to other challenges an electronic alternative poses: “In direct sunlight, it’s very difficult to read and share documents on a screen. For example…electronic logging device (ELD) is very difficult [to read] when sunny”. From an administrative side of things, Wright says increased reliance on technology, like ELDs, has made reviewing truck drivers’ hours of service (HOS), or logbooks, a burdensome affair.

Another notable commenter is a manufacturing and distributing company International Isotopes Inc. which ships Class 7 radioactive hazardous material. The company noted in its comments that its current IT infrastructure would not be capable at this time to provide electronic hazard communication to its employees, emergency response organizations, and inspectors without some delays. Like other shippers, International Isotopes Inc. would have to invest in upgrades to its transportation network to embrace an electronic alternative. The company also notes in the case of Class 7 hazardous materials, certain security controls and encryption systems would be necessary in an electronic medium.

International Isotopes Inc. did not spill any direct opinions on whether or not it supports the proposed revisions. However, it made it clear through its comments that a potential transition from physical holdings of hazardous communications to an electronic alternative would be an undertaking for its operations. From having to train employees to consulting with third-party companies to develop a capable IT infrastructure, the company is well aware of the coordination such a feat requires.

The PHMSA’s published document reports that interested persons are invited to submit comments on or before September 9. For a closer look at the proposal and related public comments, click here.