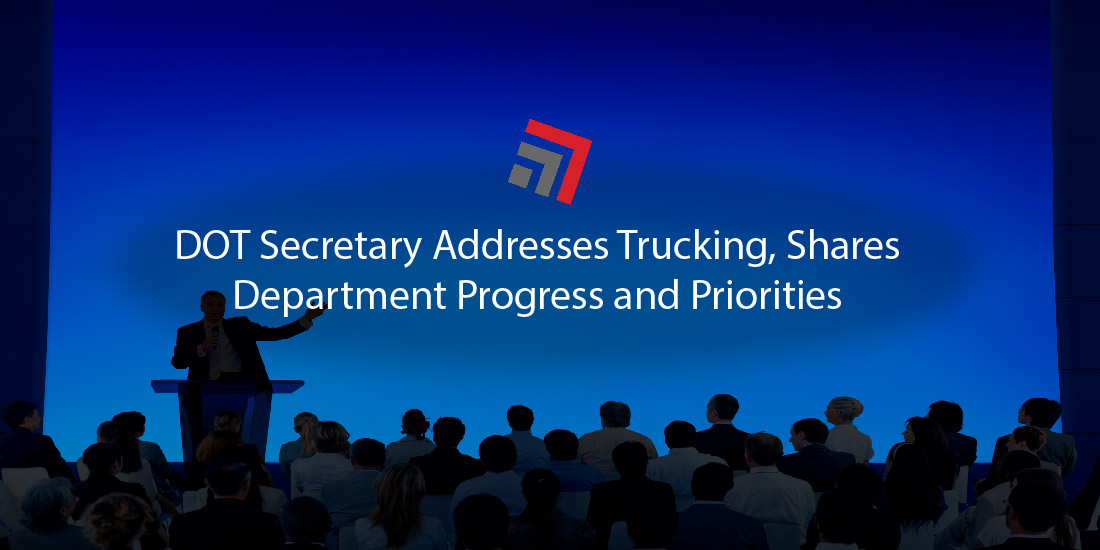 The American Trucking Association’s Management Conference & Exhibition (MCE) wrapped up last week. Thousands of stakeholders, including public officials and trucking executives, migrated from all over the country to attend this annual event.

Dubbed as “the premier event in trucking”, the MCE was held in San Diego from October 22 through the 25. While some may have came for the entertainment—country music star Walker Hayes headlined as an act—, the majority of attendees had business as their bottom line.

This includes the country’s highest-ranking transportation official—U.S. DOT Secretary Pete Buttigieg. The secretary’s purpose for visiting the MCE was clear: “To express our administration’s understanding that trucking is absolutely vital to the…backbone of the American economy.”

Secretary Pete Buttigieg did not confirm if he was in attendance for the Walker Hayes concert.

Buttigieg’s appearance was not a brief cameo. The secretary was engaged throughout the three-day conference, featuring a media roundtable where he answered individual questions.

Buttigieg’s shining moment was taking center-stage at the conference and addressing the totality of attendees. With all of MCE’s spotlight on him, Buttigieg seized the opportunity to outline progress the Biden administration has made along with a few priorities for the industry going forward.

The secretary also noted the U.S. DOT’s National Roadway Safety Strategy that looks to lessen the blow of traffic deaths that occur on roadways.

The department’s safety strategy was an apt segway into Buttigieg voicing his concern of safe operations for trucking. He went on to say, “Last year, we lost over 800 truck drivers to traffic crashes…reducing those tragedies is a shared responsibility”.

Bringing on new drivers into the industry

An intrusive thought for any stakeholder in trucking is a lack of drivers to keep the industry competitive. Buttigieg rehashed the administration’s intent on bringing in more drivers by attracting women, veterans, and incentivizing prospects with debt-free pathways into a driving career. The DOT has also partnered with its friends at the U.S. Department of Labor to increase registration numbers of its trucking apprenticeship programs.

The FMCSA (an agency under the U.S. DOT) has proposed a driver apprenticeship program that would permit 18 to 20-year-old drivers to operate commercial rigs interstate. For a closer look!

Easing the pursuit of obtaining a commercial driver’s license (CDL) has also been on the DOT’s wish list of items to improve. Buttigieg reported that the department provided funding for states to remove barriers which has helped them to add 43,000 CDLs for 2022.

DOT grants are also in play to cover training costs for veterans who are pursuing their CDLs. As a former military officer who served in Afghanistan, Buttigieg is no stranger to heavy equipment operation. No doubt, it’s likely a personal focus of his to help fellow servicemembers with easier accessibility to these careers.

Get more women involved in trucking

Maybe, an angle to calm trucking’s existential crisis of a driver shortage is by making the career more appealing for all walks of life.

Women in particular hold only 24 percent of all transportation jobs. This number incensed Buttigieg: “There’s a…madness of allowing 50 percent of our workforce…50 percent who could be the greatest, safest drivers in the country to be underused and underappreciated as a resource…shame on us…”.

Thanks to the infrastructure bill signed into law last fall, the FMCSA, an agency under the DOT, is set to launch a Women of Trucking Advisory Board. Among a swath of duties, the board will ultimately oversee industry trends and determine if any discourage women from trucking.

The board will also facilitate ways to support and expand opportunities for trucking’s women.

Our experts at Commerce Express Inc. cannot confirm if there were any hecklers at MCE during any of the keynote speeches. But, if there were, we are pretty sure it would be about truck parking.

Buttigieg acknowledged that drivers and association heads, like the ATA, have reached out to him directly to find resolve for the nation’s lack of truck parking.

Bolstered with stores of grants, the DOT has already awarded Florida and Tennessee investments to add new truck parking spaces along popular lanes of travel.

The U.S. DOT has also created a truck parking handbook that details strategies for the development and maintenance of parking infrastructure. For a closer look!

Buttigieg relayed the department’s focus on decarbonizing trucking. As a whole, the industry has been receptive to changing up its ways to reduce emissions. Technologies like battery-electric vehicles are no longer a pipedream and have spurred on the DOT’s work to implement them to certain sectors of trucking.

However, realistically some parts of trucking, especially long-haul, can’t just switch to battery-electric power. At least not yet.

Avoiding being pinned as unpragmatic, Buttigieg made it clear that sustainable practices to decarbonize can vary between sectors of the industry.

“It’s not all going to be the same…there will be a lot of particular challenges, but also different opportunities around trucking,” Buttigieg said. The secretary went on add that the department is not naïve about differences between trucking and passenger vehicles and how decarbonizing strategies will be implemented respectively.

Of course, shouldering the responsibility of trucking’s carbon footprint does not fall on trucking and federal agencies alone. Companies (shippers) and everyday consumers have tremendous power themselves to drive change towards decarbonizing. For a closer look!

Chris Spear, the head honcho of America Trucking Associations (the organization hosting the MCE event), praised the Infrastructure Investment and Jobs Act (signed into law last November). A promising sign that industry leaders and public officials are on the same page with big picture ideas.

The large bill laid out investments into the nation’s roads and bridges while also developing workforce programs, like the aforementioned apprenticeship for younger drivers.

Fresh off a significant win in court, Spear sounds like a man who believes there is no barrier trucking can’t break through.